Could only test it solo for now, but so far what's there is pretty neet and totally feels like it has that "worms" and "smash bros" level of multiplayer fun , especially the camera, i feel you got the zoom in and out on the action just right :)

Yes, I'm aiming to something similar as "Smash Bros" (never actually played it though, because I don't have any Nintendo console...), but the name "SMASHed Potatoes", is just a total coincidence, I had it way before the game started to take shape... :D

Usually, I test it in solo as well (I need to make an AI and/or implement online multiplayer, but I have no idea how to do that, yet... :D), that's why I uploaded the demo, so more people can play it and give feedback about it.

I tweaked the movement a little, but I don't want to slow it down too much, the speed is part of the fun! :D

No problem, it just that i associated the title with nintendo's smash because of the "multiplayer arena" idea,don't get me wrong,  yours definitively has its originallity though.

If you figure out how i'd say try to add an AI bot first so that you could test out some more, and you're right about the speed it's part of the fun, it's just the accel rate that was a bit fast :p i'll check the update out and see what it's like :) 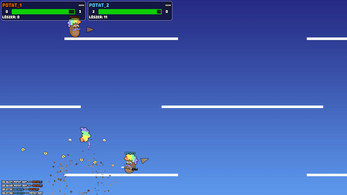